The NEWSERA-ENJOI Conference "DATA4CitSciNews" on Data Journalism, Misinformation and Citizen Science will be held on November 28 in Barcelona

In partnership with fellow EU-funded project NEWSERA, ENJOI is launching DATA4CitSciNews, an event on the state of the art of data journalism, the challenge of misinformation, and citizen science!

During the conference, an impressive line-up of media and journalism experts discussed meaningful case studies on the topics of data science journalism, journalism for the public interest, and the concept of citizen journalism applied to science coverage.

In a time when scientific misinformation and fake news are increasingly becoming a challenge both for the public and for media professionals, it was key to have an event on how citizen science can contribute to data journalism and to fight misinformation.

Rosa Arias, NEWSERA coordinator, and Elisabetta Tola, ENJOI coordinator, shared the theoretical and practical framework guiding the two projects, exploring engagement in science communication and journalism from different angles. They set the basis to discussed the importance of looking and learning from the best practices in science communication. 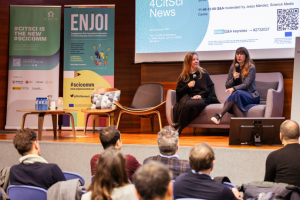 The award-winning visual designer Matteo Moretti, Sheldon.studio, gave the first keynote speech about the use of open data. He proposed to improve data journalism by designing digital commons, available to journalists, policy makers, citizens. This means making data really accessible to people by translating them through visuals and storytelling. He presented some examples of this approach developed by Sheldon.studio with different partners: the projects Glocal Climate Change (visualising the Copernicus data set on climate change), Mapping diversity (a tool to contribute and monitor inclusivity in street names) and Disabled Data (a dashboard that aggregates and reflects on data on disability in Italy). 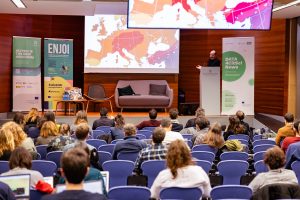 Joana Gonçalves de Sá is the Coordinator of the Social physics and Complexity Lab (SPAC). Her current research uses experimental and computational methods (big data and complex systems) to study decision-making, mainly in policy and health. During her (online) keynote speech, she explained that disinformation spreads like infectious diseases: that’s why we need to study the hosts (humans) and the environment in which it spreads (networks), to understand how to tackle the issue. Fighting misinformation, however, means also that we need to take some paradoxes into account: offering accurate information often does not help, and it might even make it worse. We need to take into account the environment of social media, in its technical details, and the psychological aspects that drive the spread of untrue information, being it intentional (fake) or unintentional (false).

Roundtable: Advancing on the concept of citizen science journalism

After the keynote speeches, a roundtable Moderated by ENJOI coordinator Elisabetta Tola followed. Three panelists presented some examples of innovative projects that bring together data, transparency and community engagement.

Jacopo Ottaviani presented Mapping Makoko, a project mapping the informal settlements in Nigeria. The open data map is published in open street map and created with the engagement of locals. A project that aims to the transfer of knowledge about data and to create a relationship with local media.

Karma Peirò presented the work done by the Visualization for Transparency Foundation. The fondation was founded in 2020, and in these two years has worked on new ways to give access to open data to citizens. For example, it has aggregated and published data on COVID vaccination in Spain and on the health impacts of air pollution.

Christoph Raetzsch talked about Infrapublics, a project that involves workshops to reflect on how people make sense of large scale phenomena (data being one of them). Infrapublic addresses a gap between journalism studies and smart city research, taking the datafication of urban spaces as an opportunity for journalism to go beyond the “informed citizen” model of its audience. The project maps and evaluates approaches to how journalists, citizens, cities, data providers and civic tech NGO’s work together on a local level to shape infrastructures for civic communication in the connected city.

During this interactive session, NEWSERA Data journalism expert Marco Boscolo guided the speakers to go back at the concepts of data journalism and misinformation and discuss tips and suggestions to avoid misinformation when doing science journalism, data journalism and citizen science journalism. The audience contributed to the discussion ranking the importance of different tips. “Publishing methodology and data following FAIR principles” was ranked first, followed by “Discussing existing gaps in knowledge and limitations of the scientific method”. Among a second round of tips, the most important was valued to be “Build trust relations with different stakeholders” and “Be open and transparent about your motivations and potential conflicts of interest”.

The last session of the day was conducted by visual and design thinker Edgar Sanjuán, who summed up the most important concepts emerged during the whole morning in an illustrated map. 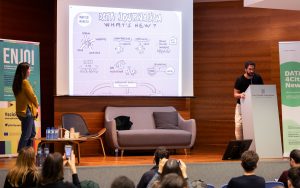 For those who are not able to attend, the conferences was live-streamed on the NEWSERA YouTube channel.

During the afternoon, the same venue hosted two labs by NEWSERA and ENJOI for invited participants:

This text was developed from the reports by Karinna Matozinhos (Science for Change) and the NEWSERA team. Read the news about the DATA4CitSciNews Conference on the NEWSERA website: