The third ENJOI Engagement Workshop was held in Barcelona, Spain, in April 2022. Co-creating the standards, principles and indicators in science communication and journalism 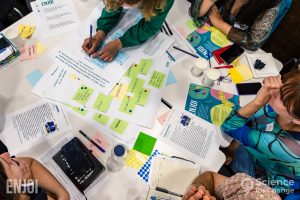 It was the third face-to-face event after the EW in Italy and Belgium. Participants co-created the Standards, Principles and Indicators (SPIs) for outstanding open science communication through different dynamics that were constantly adapted thanks to the cascade model used in the project.

This approach allowed the collection and use of feedback iteratively from one EW to the next one, to improve how to co-create SPIs and to start designing pathways that will inspire the production of innovative, practical tools to foster capacity building both for producers and users of scientific information.

The Engagement Workshop in Spain was organised by Science for Change, a Barcelona-based SME working to address socio-environmental challenges through citizen science and participatory approaches, and ENJOI partner.

The ENJOI EW in Spain: have a look 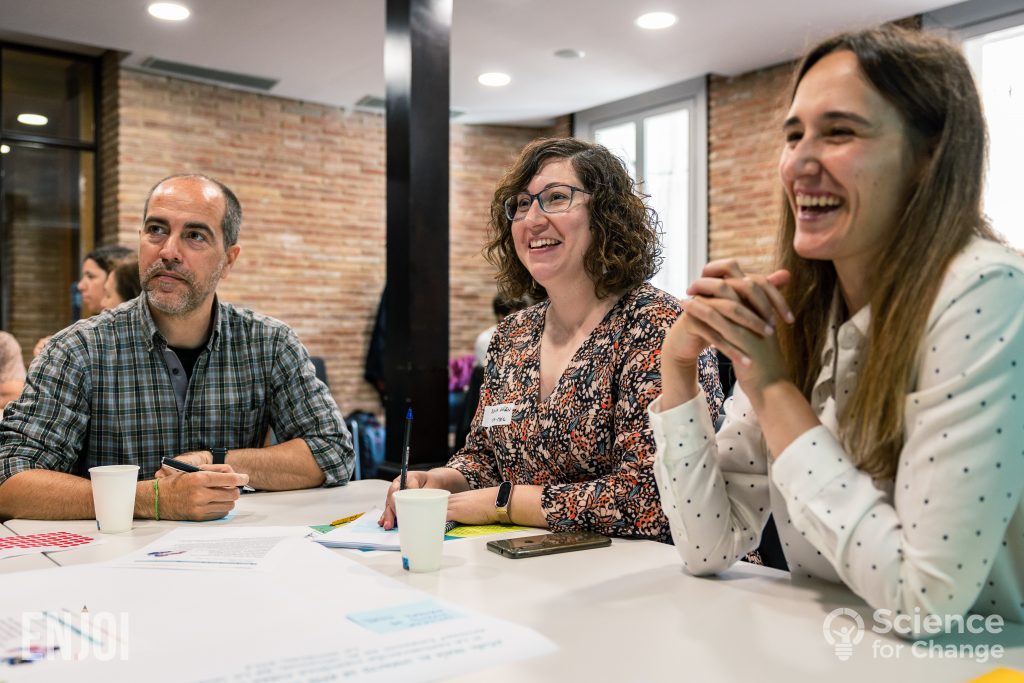 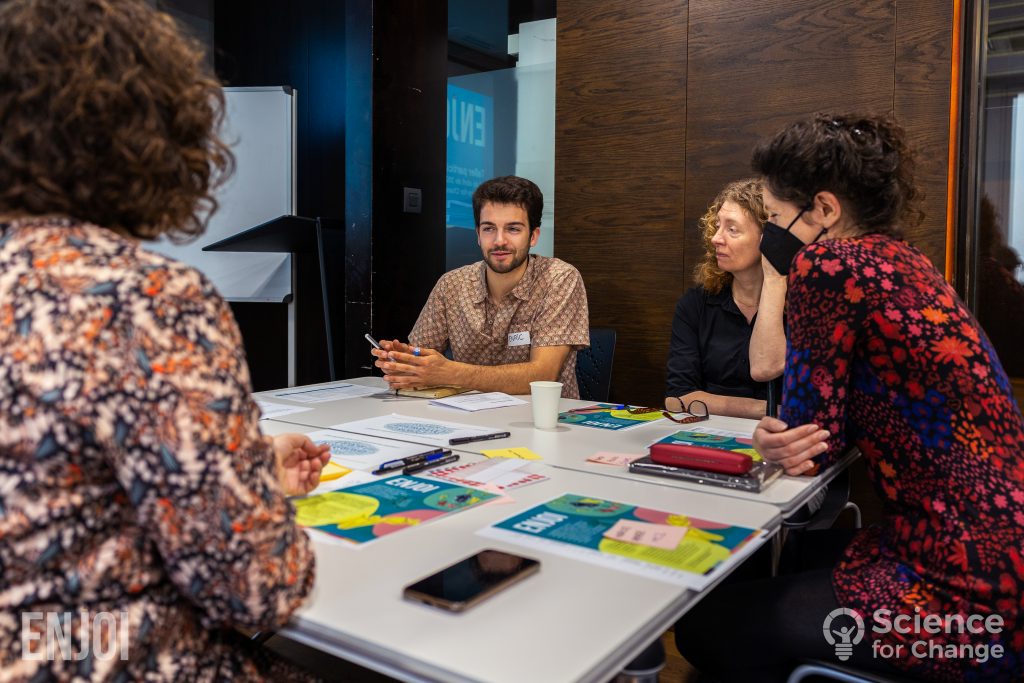 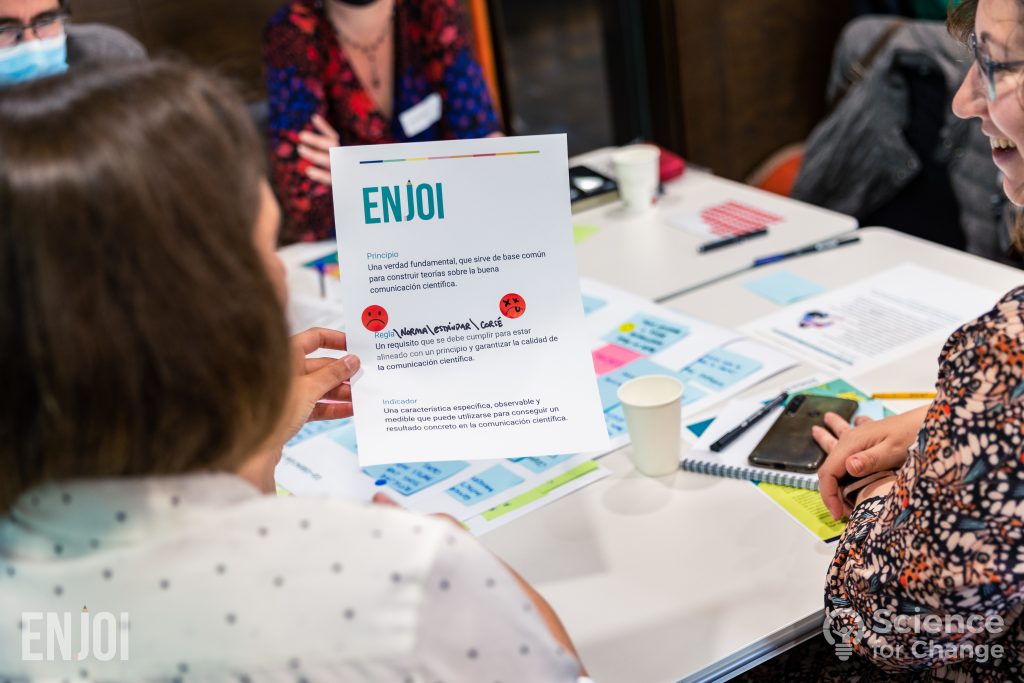 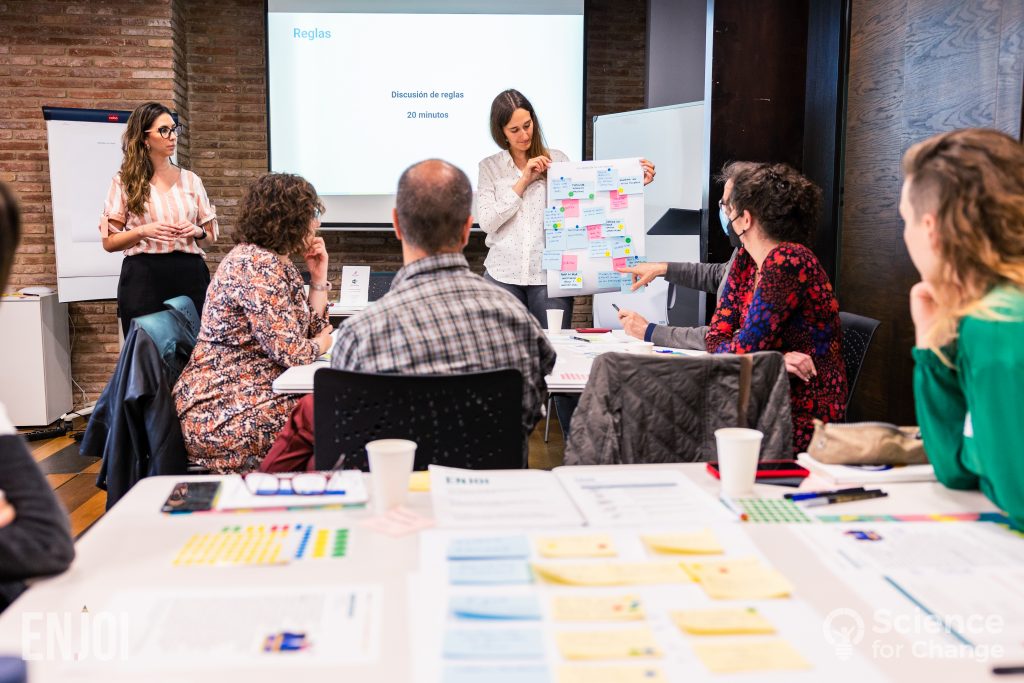 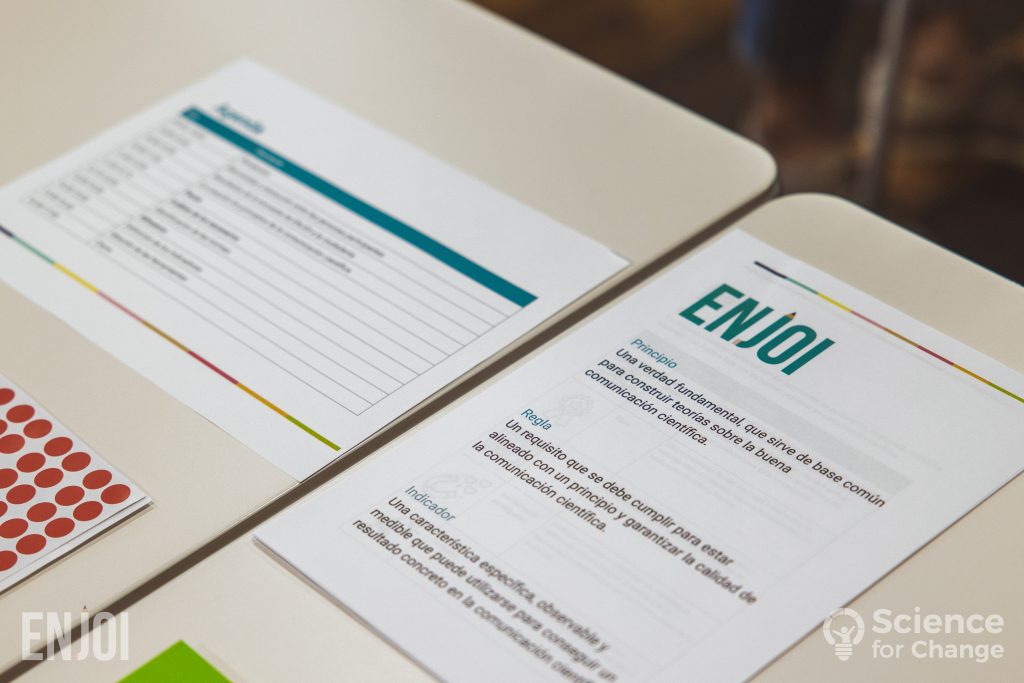 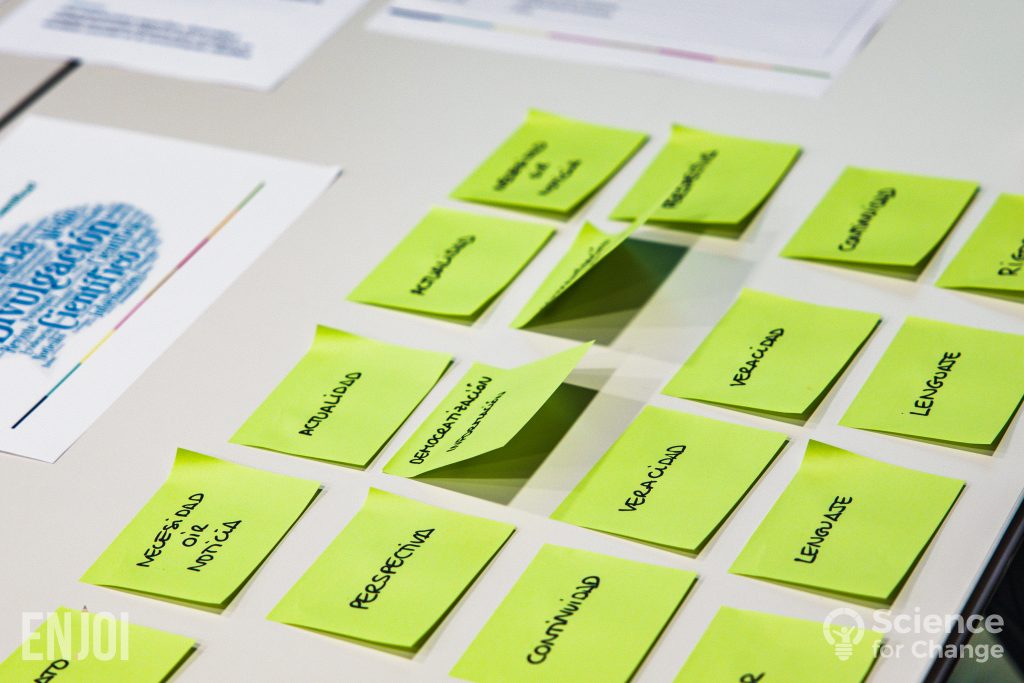 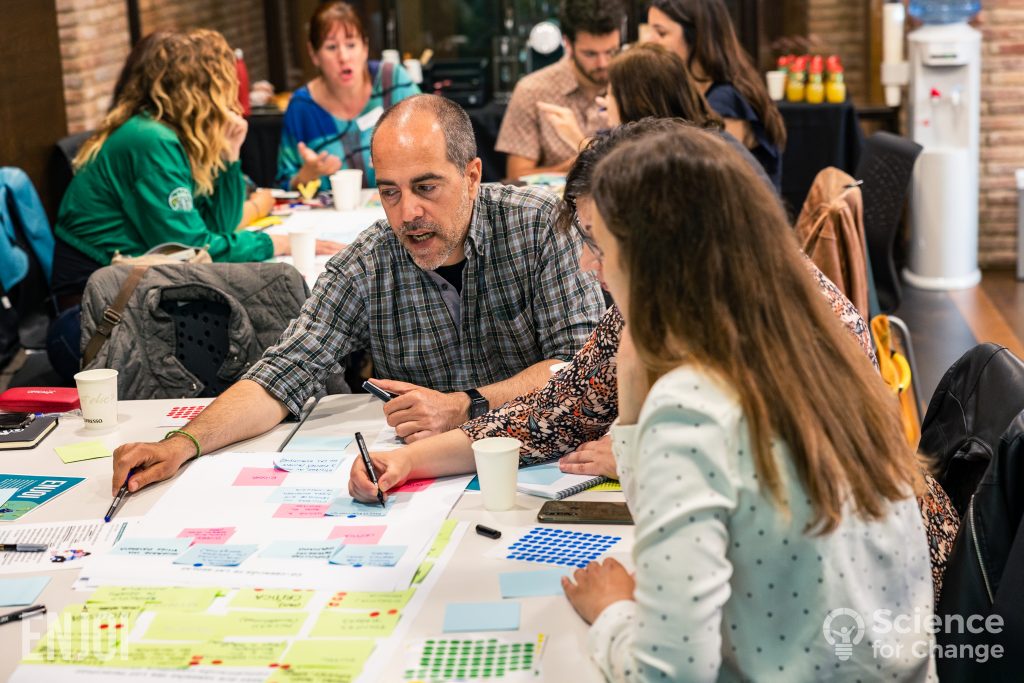 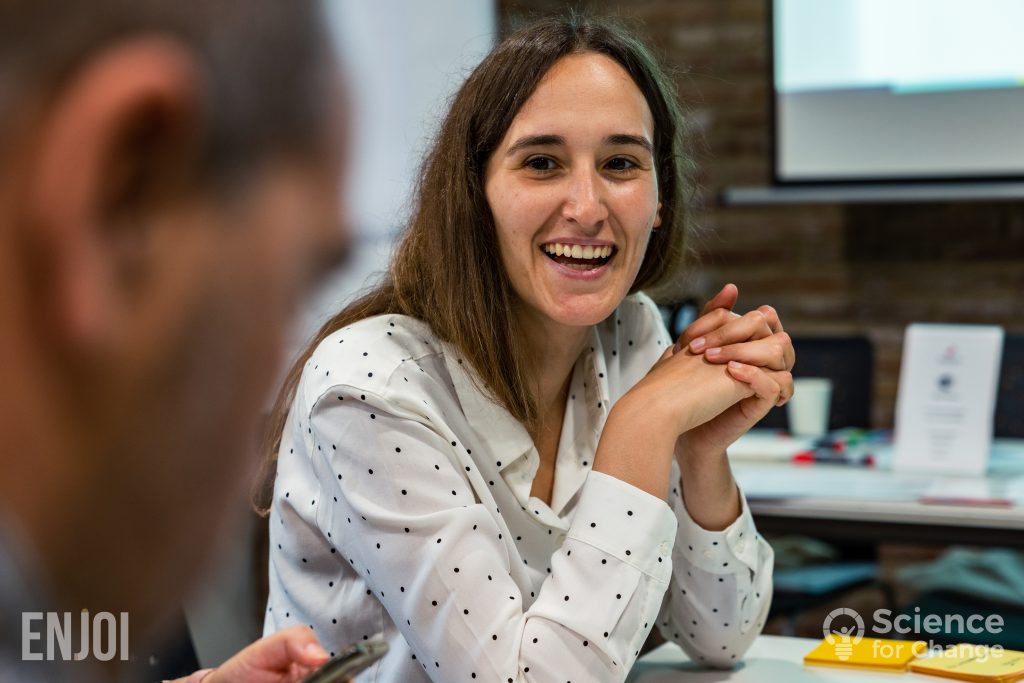 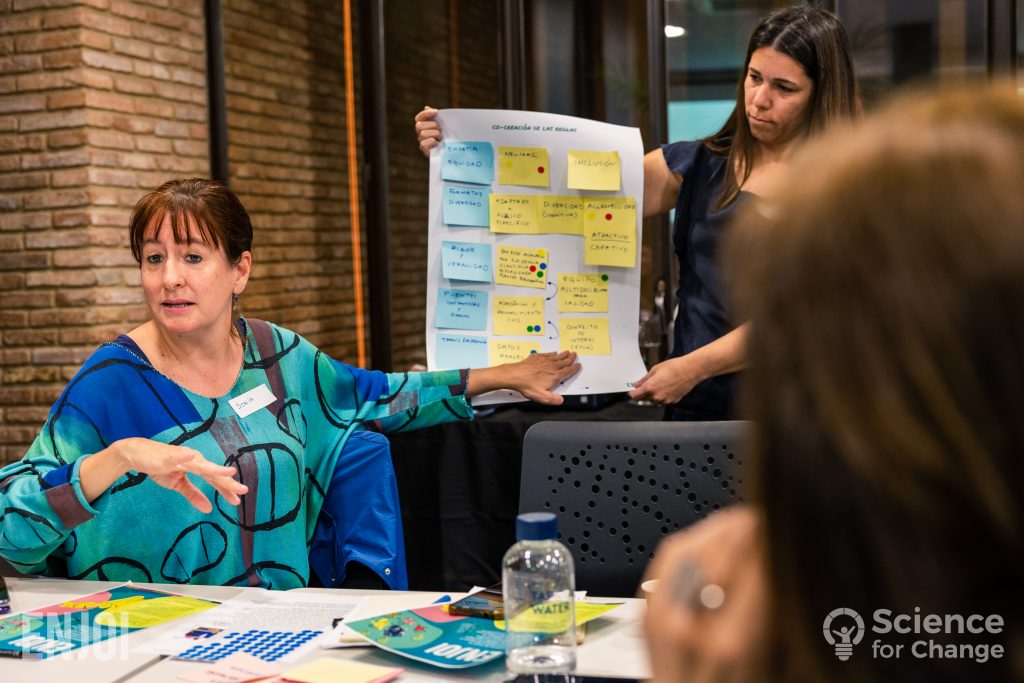 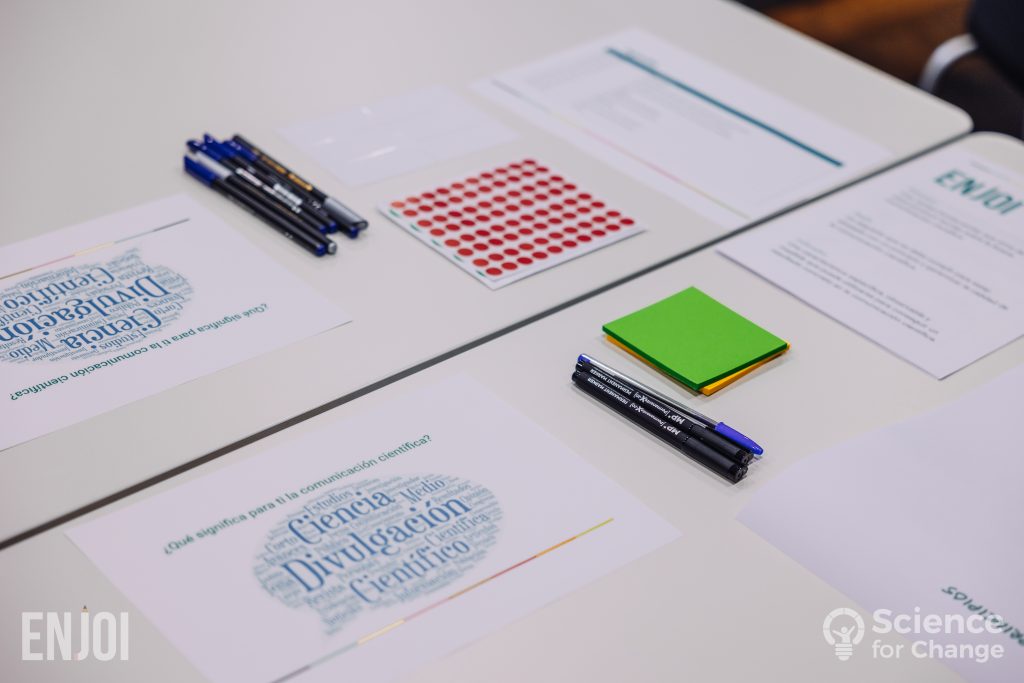 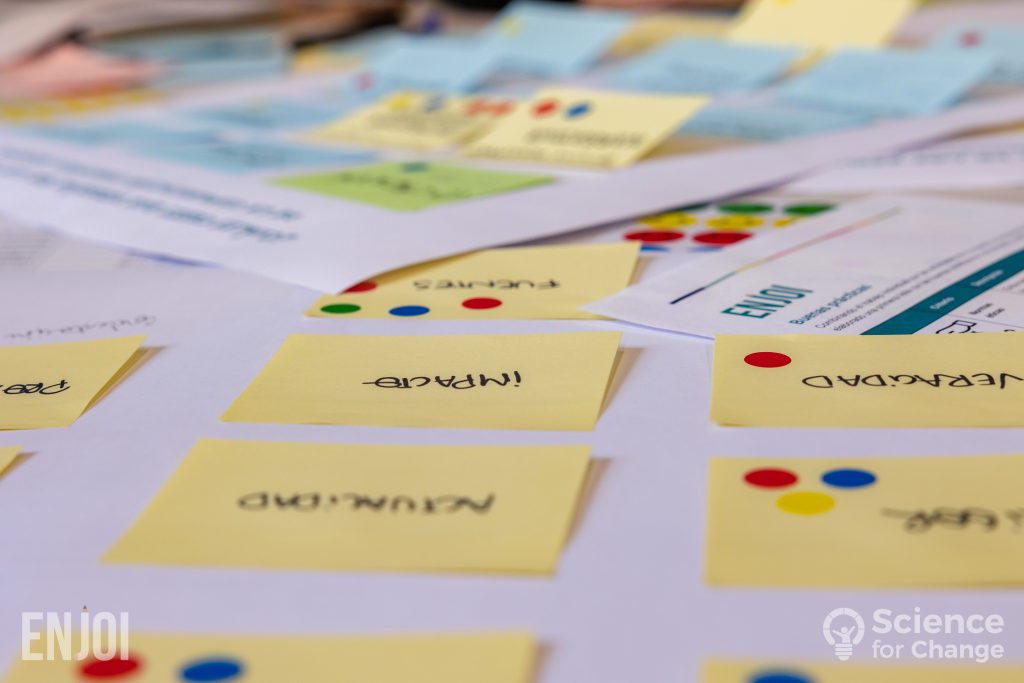 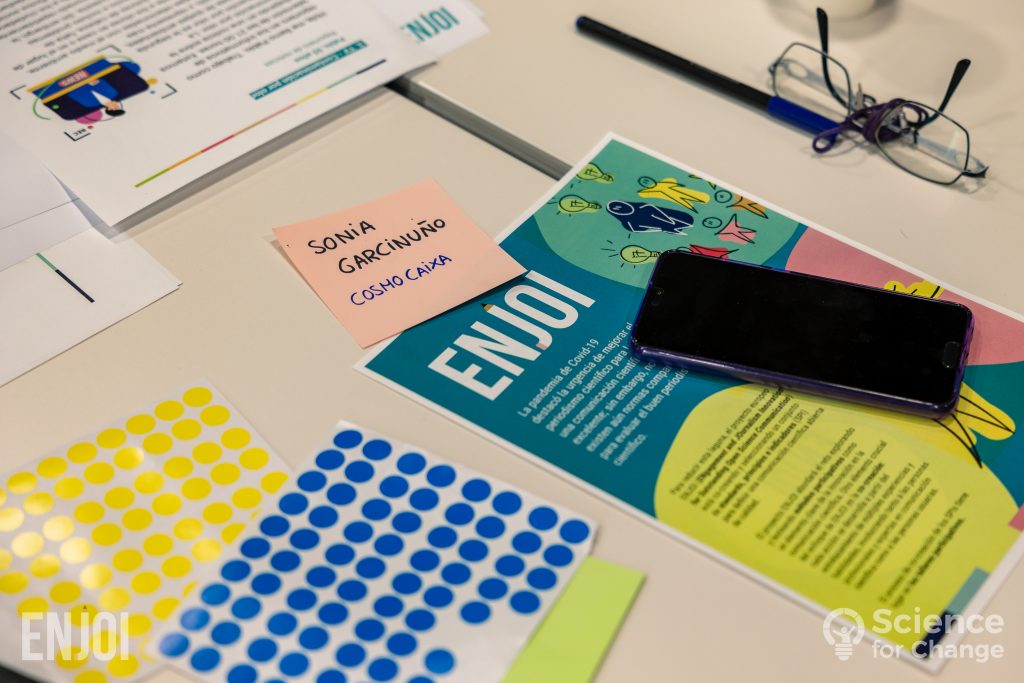 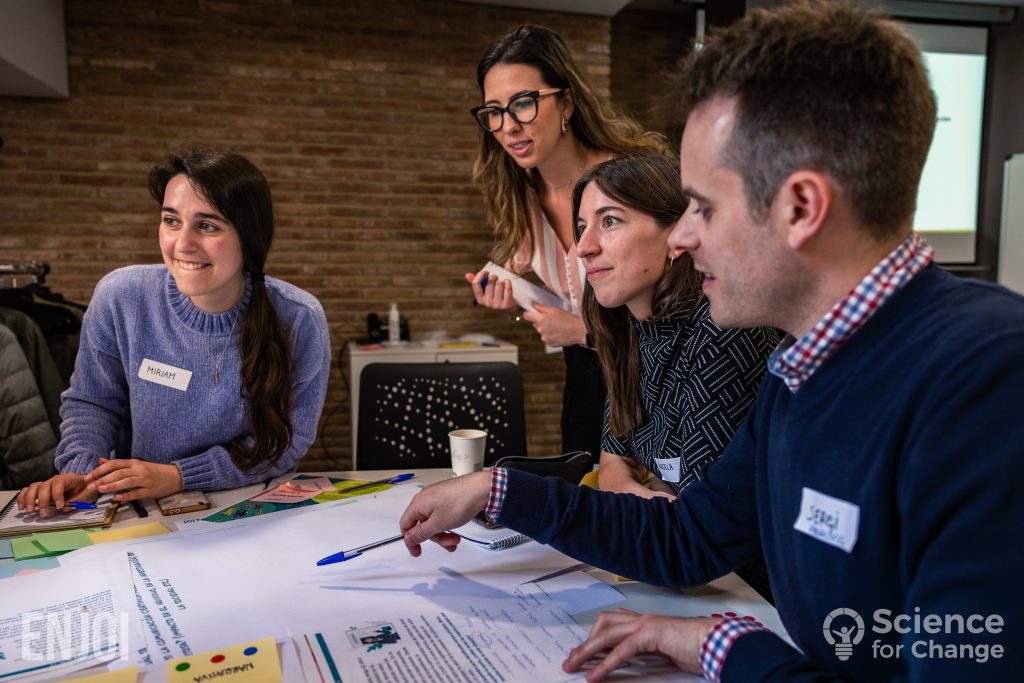 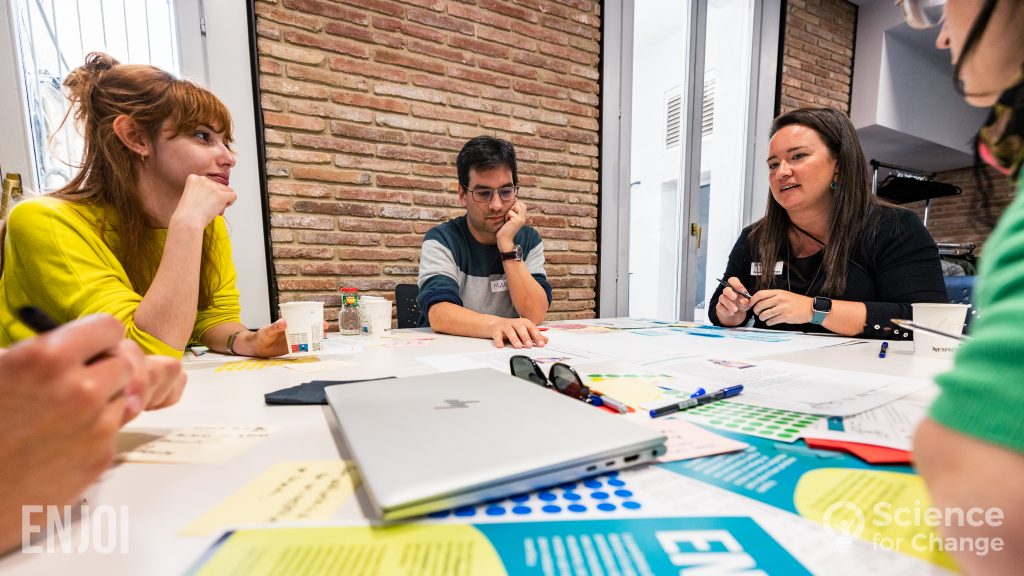 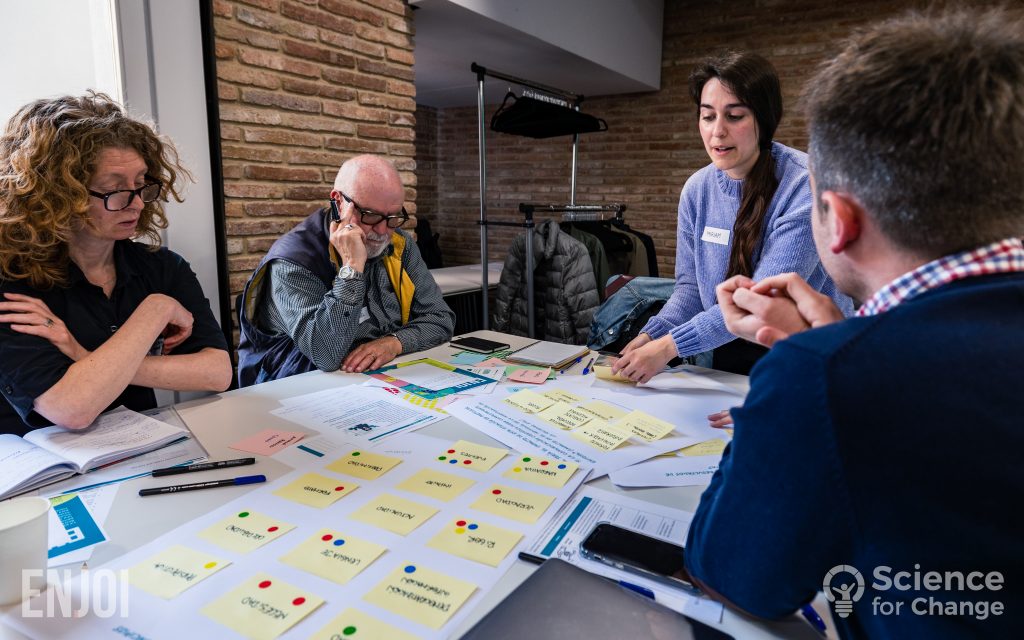 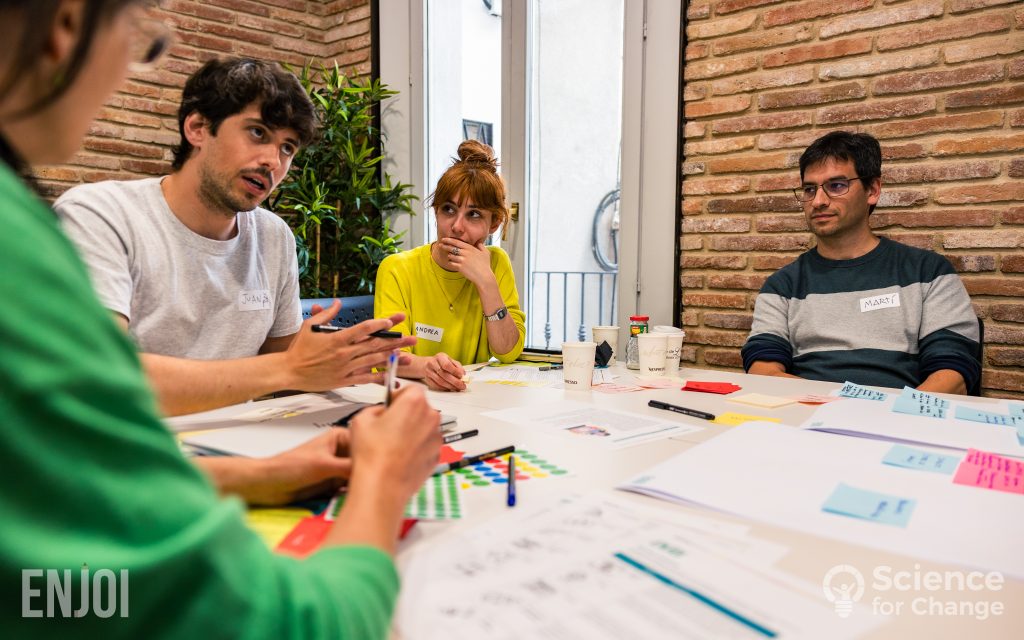 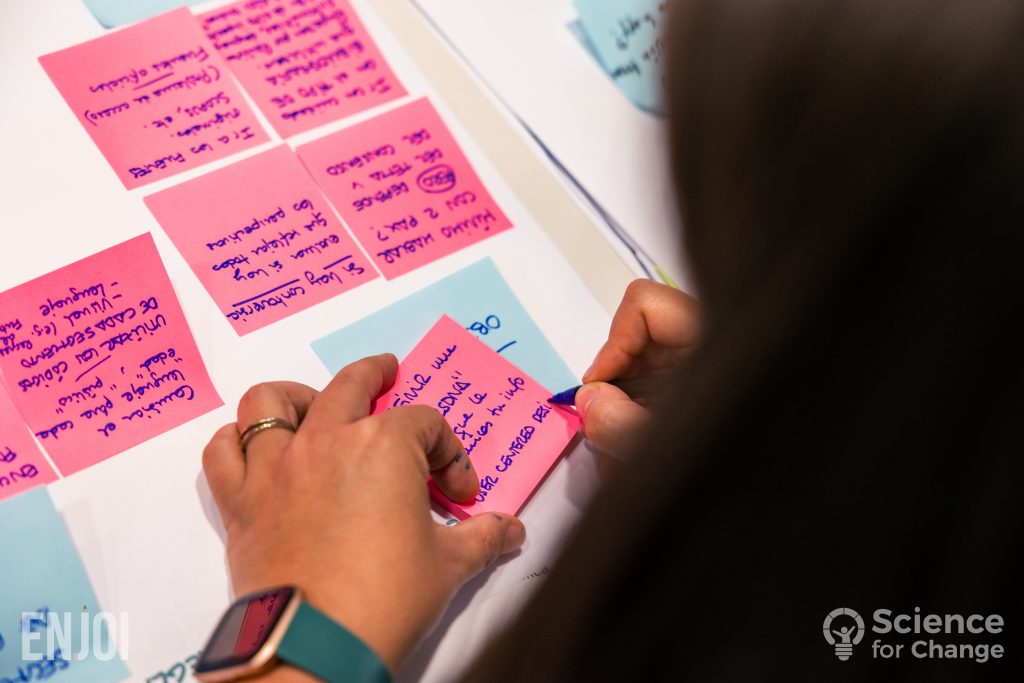 The ENJOI EW in Spain: participants

The event was attended by 14 participants from different parts of Spain. They were journalists, researchers, museum professionals, communication and dissemination experts, all connected with science on a daily basis. The atmosphere was very energetic, relaxed and collaborative.

The workshop was divided into activities about the co-creation of principles, identification of standards, definition of indicators and ideation of tools.

In order to achieve an inviting and inclusive environment where participants could freely brainstorm, different dynamics were created to promote engagement in the EW. 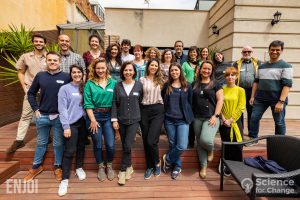 The participants highlighted the importance of having rigour, sources and diverse format as principles, beyond others. When comparing with other countries, the principles that were distinctive are: 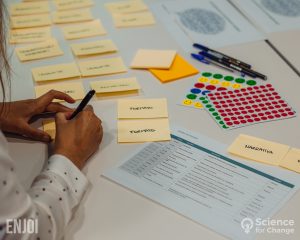 When discussing what would be the best practices to accomplish those principles, the participants featured: The discussion about indicators ran smoothly, even though it was the one where participants diverged more on their opinions. For example, the indicators on social media and the ones related to sources appeared to be controversial. Shouldn’t journalists also consider interviewing academics in different stages of their career and not only focus on the highest level?

Related to the tools,  it was a very creative moment. Participants had fun thinking about many possibilities that might improve science communication and journalism in a practical way. In particular: It is important to promote a multidisciplinary team with specialists in different topics more than focus on the multitasking ability of professionals and their exhaustion. Another crucial outcome was the need to have more creative narratives that connect art and science to promote empathy in the news.

The participants are motivated to be in touch and be part of the ENJOI Observatory. Ruan Romero, one of the participants from a research group at the University of Juan Carlos, shared the Spanish EW outcomes with his collaborators: the result was a nice infographic - check it out! You can also read the Spanish article here.

Pictures by Science for Change