The fourth and last ENJOI Engagement Workshop was held in Lisbon, Portugal, in May 2022. Co-creating the standards, principles and indicators in science communication and journalism The main objective of the ENJOI Engagement Workshops (EWs) was to engage people from various backgrounds in the joint creation of Standards, Principles and Indicators (the so-called SPIs) for good scientific communication and journalism. Through collaborative discussions and co-creation activities, the EWs are contributing to developing guidelines to assist content producers’ daily work. Overall, more than 50 professionals from different fields participated in the EWs and actively contributed to the list of SPIs development.

Following the participatory approach of the Engagement Workshops in Italy, Belgium, and Spain, the ENJOI EW in Portugal gathered diverse professionals to discuss good practices in science communication and journalism.

The EW in Portugal was organised by FC.ID, partner of ENJOI at the Faculdade de Ciências da Universidade de Lisboa (Ciências/ULisboa), and it closes the series of workshops started in Italy in March 2022. The methodology at the core of the ENJOI EWs has been constantly adapted and improved after each round of workshops.

The ENJOI EW in Portugal: have a look 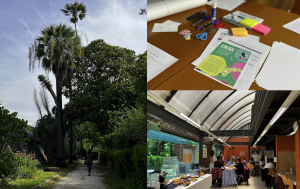 Surrounded by trees, in a former greenhouse full of natural light located at the National Museum of Natural History and Science (MUHNAC) in Lisbon, the Portuguese EW took place on May 25, 2022. Participants concretely contributed to creating a relaxing and constructive atmosphere. They also demonstrated a great willingness to share their competencies, reflections, and practices in science communication and journalism.

Going back to in-person meetings, even though Covid-19 was still very present in our lives, turned out to be quite challenging. However, the opportunity to participate in a discussion forum involving several professional profiles was greatly appreciated by the participants, who enjoyed breaking out of their routines and having the time and space to meet professionals from very different backgrounds. The EW dynamics allowed to create a productive experience for mutual learning, information exchange and networking, as well as an opportunity to reflect with others upon their practices. 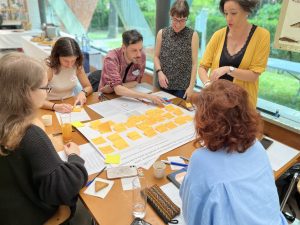 The ENJOI EW in Portugal: participants

A hallmark of ENJOI is the engagement of multiple stakeholders in the co-creation processes. Given the characteristics of the current media environment – where the distinction between content producers and audiences is blurred – it is important that all actors who play a role in the media ecosystem are involved in the discussion.

As in the previous EWs, in Portugal we sought to ensure a variety of voices by inviting professionals with different experiences, profiles, and backgrounds.

All of them, 13 in total, were fully engaged in the dynamics designed and shared their experiences, opinions, needs, and challenges in a very constructive way. 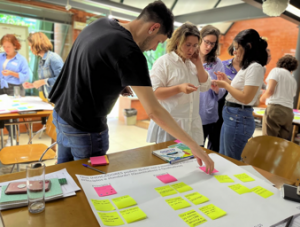 The first part of the session was devoted to the co-creation of Principles and Standards, which were worked together to facilitate their understanding. Working in small groups of professionals with varying backgrounds, the participants started brainstorming about principles and the associated standards. This first step was followed by clustering and prioritising the most relevant principles, which were discussed collectively.

Here below are the resulting co-created Principles and Standards:

Generally speaking, quantitative and qualitative indicators are useful tools for assessing performance. Here, as well, indicators can be helpful to evaluate to what extent principles and standards are applied when analysing a journalistic piece.

Following a similar approach, indicators were also brainstormed (in this case, through several rounds of interactions) and clustered.

After a collective discussion, here is the final list of indicators per each of the identified principles: Last but not least, participants were asked to co-design innovative tools and products to put the co-created SPIs into practice. Following a design thinking approach, the groups developed prototypes that will serve as inspiration for the innovative and practical tools, services and products to be produced, tested and evaluated within ENJOI.

It is important for the participants to create spaces where professionals (in particular, journalists and researchers) can share questions and issues related to their practices. Establishing open and constructive discussions can help set a common ground for understanding their ‘ways of doing’ and then promote mutual understanding that benefits both communication and science practices.

Inclusion of diversity when reporting about science was also acknowledged as an important lesson learned. To actively look for diverse profiles of the sources (i.e., gender, career stage, field of expertise, socio-economic status, ethnicity, nationality, etc.) is essential to ensure the representation of society in science stories. Thus, including less represented voices as well as professionals with diversified backgrounds in the newsrooms can promote more inclusive journalism and science communication.

Finally, the promotion and economic support of the so-called ‘slow journalism’ would benefit both content producers and their audiences. To produce articles that are accurate and supported by facts, that incorporate multiple (and diversified) sources, that are rigorous, and that respond to people’s needs for information in a way that is accessible to them require time and resources. Two constraints that have a significant impact on the sustainability and quality of the media. 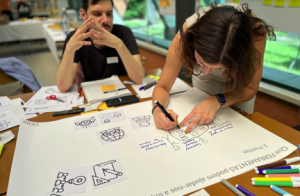 We would like to thank all participants for their contributions!